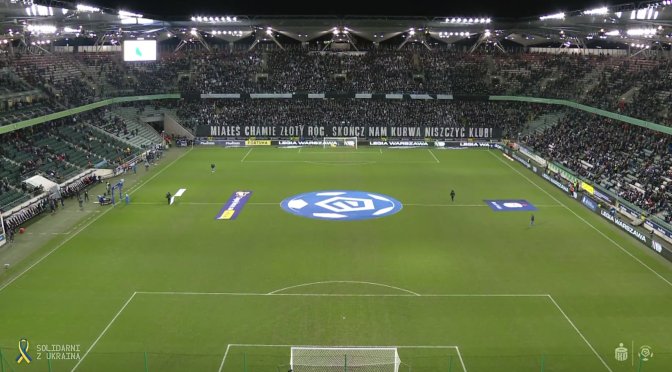 Despite an Ekstraklasa relegation battle against historic rivals Wisła Kraków, Legia Warsaw fans spent the evening protesting in the capital – both against the Russian invasion of neighbouring Ukraine and their own president Dariusz Mioduski.

With long-eminating anger at the running of the club, the demonstrations against Mioduski had been well planned in advance. The usually white-clad Żyleta (the ultras in the north stand) were decked out entirely in black, and made their way to the stadium with a banner declaring “Dariusz Precz!” (“Dariusz get out!”).

Then, inside the stadium, further protests came in the form of a tifo directed at the 58-year-old.

As well as their owner, Legia fans also took a shot at Russian president Vladimir Putin. In addition to a banner declaring “Putin chuj” (“Putin d*ck”), both they and the fans of their historic rivals Wisła joined together for a deafening chorus of “Ruska k*rwa” (“Russian wh*res”).

On the pitch, Legia returned to winning ways with a 2-1 victory – leapfrogging the Biała Gwiazda out of the relegation zone. Legia had opened the scoring after 8 minutes through Tomas Pekhart, but were pegged back ten minutes from time by defender Konrad Gruszkowski. The hosts had to wait until the fourth minute of injury time to claim all three points, through Mateusz Wieteska’s header; while Wisła’s Michał Frydrych saw his third red card of the season – after the final whistle had blown – for throwing the ball at the referee.